In this tutorial we will be making a simple but efficient Nodejs app named as ‘TODO-list-app’ that will use Mongo DB for storing data in json like format(No-sql).

What are different types of errors in Python?

How do you throw an error in Python?

What is difference between error and exception in Python?

How do you ignore an error in Python?

Node JS is not a programming language, it uses JavaScript language as the main programming interface.

Node runtime can be compared to the JVM Java Virtual Machine or the IDLE Python interpreter.

What is best about Nodejs ?

Wait there are more to clear.

What is node js used for?

Is node js a programming language?

Is node JS frontend or backend?

What is special about node js?

One of the biggest reasons why Node. js is so popular is because it uses JavaScript as its main language to build web applications.

npm install downloads a package and it’s dependencies. npm install can be run with or without arguments.

MongoDB is an open-source document database and leading NoSQL database. MongoDB is written in C++.

What is MongoDB good for?

Is MongoDB better than SQL?

Why is MongoDB called Mongodb?

What big companies use MongoDB?

MongoDB is great for transactional stores where performance is a concern.

Why is MongoDB called Mongodb?

What big companies use MongoDB?

Why is MongoDB bad?

Why is MongoDB so popular?

MongoDB is best suitable for hierarchical data storage, but RDBMS is not.

MongoDB uses the MongoDB Query Language (MQL), designed for easy use by developers.

MongoDB deployments typically use inexpensive, commodity Linux servers that cost as little as $3,000.

What is CRUD operation API?

What is CRUD operation C#?

What is Java CRUD operation?

Is rest only for crud?

The ultmate answer to this is:

CRUD stands for “Create, Read, Update, and Delete,” which are the four basic database operations.

What you will be needing?

Have your choice of editor.

Proceed them one by one or try this

Why there is a need of nodemon ?

nodemon is a tool that helps develop node.js based applications by automatically restarting the node application when file changes.

What is Nodemon in Nodejs?

How do I run node js in node JS?

How do I run Nodemon?

What is the use of Nodemon?

If you want you may have changes according to your need:

Create a directory and name it as package.json

Source code is below:

Open up your app folder and create a index.js file & copy paste the below code:

Tip: you can change the port.

Just type npm start and open up your browser and head towards http:localhost:3000 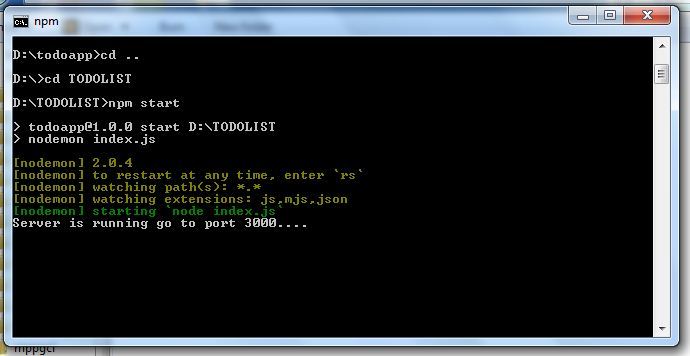 Get method will be used as its considered to be the best method Once this information is submitted, you can see it in your browser’s URL.

now just save this piece of code in your index.js file.